What is earth-moving equipment and how is it used?

The majority of building sites need heavy machinery. Inadequate equipment maintenance is not only hazardous but may also result in hefty repairs and equipment failures in the future.

Let's take a look at the most important types of earth-moving equipment in the UAE, as well as some suggestions and best practices for ensuring their safety, maintenance, and effective operation. 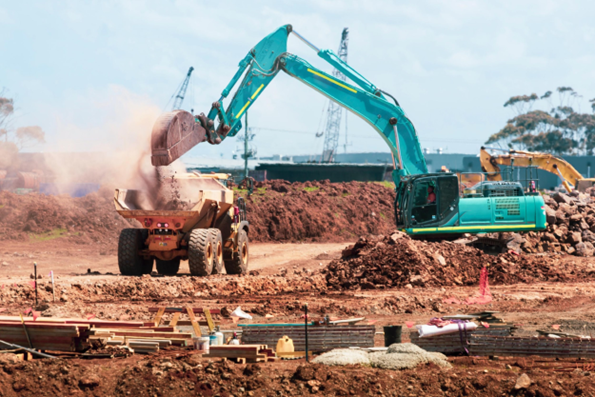 What is earth-moving equipment?

As the name suggests, earth-moving equipment is usually any large piece of machinery that can move soil and rocks and level them. Aside from construction, they are also used for moving materials, tearing down buildings, mining, and any other job that needs more power than a person can give.

There are many different kinds of earth-moving equipment in the UAE. Each has its purpose and is made for a certain task.

Heavy construction equipment and excavators comprise a boom, dipper (or stick), bucket, and cab mounted on a rotating platform known as the "house." The home is supported by an undercarriage with wheels or tracks. All movements and operations of a hydraulic excavator are facilitated by hydraulic fluid, hydraulic cylinders, and hydraulic motors. Due to the linear actuation of hydraulic cylinders, their mode of operation is fundamentally distinct from that of cable-operated excavators, which utilize winches and steel ropes to achieve movement.

A backhoe loader, also known as a loader backhoe, digger in layman's terms, or backhoe in the industry, is a piece of heavy equipment consisting of a tractor-like unit equipped with a loader-style shovel/bucket on the front and a backhoe on the rear. Due to their (relatively) modest size and adaptability, backhoe loaders are widely used in urban engineering and minor construction projects (such as constructing a tiny home, repairing urban highways, etc.) as well as in developing nations.

A bulldozer is a tractor equipped with a substantial metal plate (known as a blade) that is used to push large quantities of soil, sand, rubble or other such material during construction or conversion work. Bulldozers are typically equipped at the rear with a claw-like device (known as a ripper) to loosen densely compacted materials. Typically, it is a crawler (continuous track) tractor. In a variety of places, including mines and quarries, military facilities, heavy industry enterprises, engineering projects, and farms, bulldozers may be found. 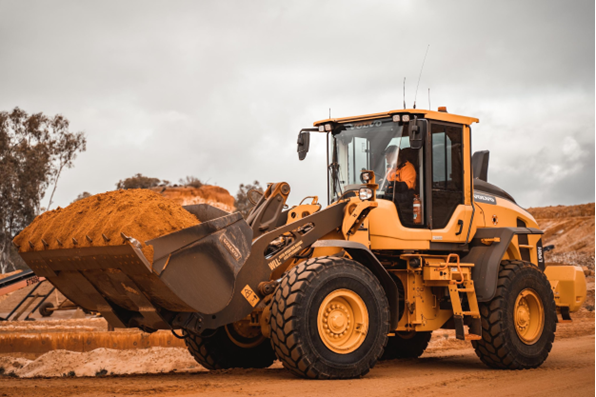 A skid loader is a compact, engine-powered, rigid-frame equipment with lift arms that are used to connect a range of labor-saving gadgets or attachments. Skid-steer loaders are generally four-wheeled vehicles having mechanically locked wheels on each side, and where the left-side drive wheels may be operated independently of the right-side drive wheels. Torsional forces created by this dragging action cannot damage the machine due to the equipment's exceptionally stiff structure and robust wheel bearings.

During the grading process, a motor grader is an earth-moving equipment with a long blade used to produce a level surface. Although the oldest types were drawn by horses or other propelled equipment, the majority of current graders are driven by an engine and are thus technically incorrectly referred to as "motor graders." Typical variants feature three axles, with the engine and cab located above the rear axles at one end of the vehicle, a third axle at the front end, and the blade in between. Some motor graders also have the front-wheel drive to enhance their grading capabilities. Numerous graders feature optional back attachments that may include a ripper, scarifier, blade, or compactor.

A trencher is a type of earth-moving equipment in the UAE used to dig trenches, often in preparation for trench warfare or the installation of pipelines or electrical connections. There are several sizes of trenchers, including walk-behind units, attachments for skid loaders or tractors, and extremely large tracked heavy equipment.

A loader is a piece of earth-moving equipment used to transport or load materials such as asphalt, demolition waste, dirt, snow, feed, gravel, logs, raw minerals, recycled material, rock, sand, woodchips, etc. into or onto another kind of machinery (such as a dump truck, conveyor belt, feed-hopper, or railroad car). There are several varieties of loaders that, depending on their design and function, are known by different names, such as bucket loader, front loader, front-end loader, payloader, scoop, shovel, skip loader, wheel loader, and skid-steer.

A wheel tractor-scraper is a form of large earth-moving equipment in the UAE. The rear portion of the scraper has a vertically movable hopper with an adjustable horizontal front edge. The front edge slices into the earth, similar to a wood plane, and fills the hopper. When the hopper is filled, it is lifted and sealed, allowing the scraper to transfer its load to the place where it will be deposited. A conveyor belt transports material from the cutting edge to the hopper using a kind of scraper known as an elevating scraper.

Heavy equipment used in civil engineering and surface mining is a dragline excavator. There are two basic groups of draglines: those based on standard, lifting cranes and the hefty units that must be constructed on-site. Most crawler cranes, when equipped with a front-mounted winch drum, may function as draglines. As with other cranes, these machines are intended to be disassembled and moved on flatbed trucks. Civil engineering draglines are virtually often of this smaller crane kind. These are used for road building, port development, pond, and canal dredging, and pile driving.

A paver (paver finisher, asphalt finisher, paving machine) is a type of earth-moving equipment used for laying asphalt on roads, bridges, parking lots, and other similar surfaces. It flattens the asphalt and offers little compaction before a roller compacts it. 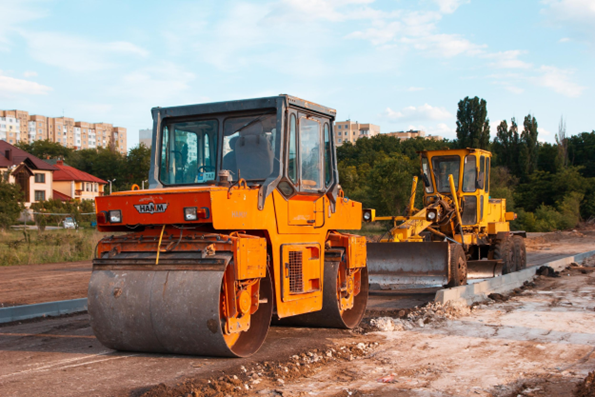 A compactor is a machine or mechanism that is used to decrease the volume of garbage or biomass by compaction. A garbage compactor is often used by homes and businesses to minimize the amount of waste generated. To optimize logistics, baler-wrapper compactors are often employed to create compact, wrapped bales. Typically driven by hydraulics, compactors come in a variety of forms and sizes. In landfills, for instance, a big tractor with spiked steel wheels, known as a landfill compactor, is used to drive over rubbish placed by waste collecting trucks (WCVs).

The boom of the telehandler (telescopic handler) is designed to accommodate an attachment coupler. The capabilities of telehandlers vary from models with a lifting capacity of 6,000 pounds and a lift height of 20 feet to those that can raise over 20,000 pounds at 100 feet. The telehandler's attraction goes beyond its capacity to operate as a rough-terrain forklift; it may be equipped with loose-material buckets, pipe clamps, truss booms, augers, grapples, and brooms.

A Feller buncher is a kind of logging harvester. It is a motorized vehicle equipped with an attachment that may quickly collect and chop a tree before falling. Feller is a traditional term for a tree cutter

i. And bunching is the skidding and assembling of two or more trees.

ii. A feller buncher serves both of these harvesting roles and is composed of a typical heavy equipment base with a tree-grabbing mechanism equipped with a chainsaw, circular saw, or shear—a pinching device meant to chop tiny trees off at the base. The machine then stacks the felled tree so that it may be transported by a skidder, forwarder, or yarder for additional processing, such as delimbing, bucking, loading, or chipping.

A dump truck, also known as a dumper truck or tipper truck, is used to transport coal and construction waste (such as sand, gravel, or demolition debris). The open-box bed of a conventional dump truck is hinged at the back and fitted with hydraulic rams to elevate the front, enabling the material in the bed to be dropped ("dumped") on the ground behind the vehicle at the point of delivery. 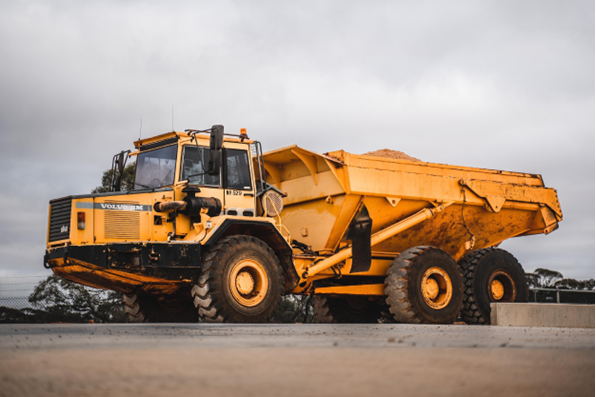 A pile driver is a device used to drive piles into the ground to provide support for the foundations of buildings and other structures. The phrase is also used to refer to construction crew members who operate pile-driving rigs. A pile driver utilizes a weight placed between guides to enable vertical movement. It is put atop a stack. The weight is increased using hydraulics, steam, diesel, or physical labor, as applicable. When the weight reaches its peak, it is released, striking the pike and forcing it into the earth.

Crawled loaders are equipment having a tracked chassis and a loader that can dig and move/load materials. They are an adaptable component of any fleet, capable of a variety of activities. Today, loaders are most often used to transport large goods on building sites. They are suitable for transporting wood chips, sand, rock, and recyclable goods. Crawler loaders travel on tracks, which may be built from a variety of materials and with a varied number of grousers to allow for maneuverability on diverse terrains. The functioning of the machines is simplified by hydrostatic drives.

This sort of machinery often undertakes hard and filthy tasks, which might affect its performance. Because of this, all of the parts of earth-moving equipment should be cleaned regularly.

Educate employees on how to operate earth-moving equipment

Regular equipment inspections and preventative maintenance go hand in hand.Depending on the sort of earth-moving equipment you have and how frequently you use it, your inspection schedules may vary, but it's a good idea to do these checks at least once a year. If you do not have a mechanic on staff, you may want to hire someone to examine your equipment.

Get the right parts and tools

You should not attempt to connect and use tools that do not fit or are incompatible with heavy equipment. If you try to do so, you will damage the equipment. Likewise, employees are in danger. Consult the manufacturer's instructions and locate the proper components and equipment.

The top UAE companies sell high-quality earth-moving equipment spare parts and tools that are used in the earth-moving equipment process. These tools include all of the specialized equipment and tools that are needed to do a good job of moving the earth. Earthmoving Companies near UAE hire trained people to do these jobs so they can be done safely and well. They are very good at using heavy equipment to move dirt, rocks, boulders, and other things off of the construction site. In addition to selling earth moving equipment and parts, they also offer specialized services, such as professional repairs. With these professional repair services and genuine spare parts, customers are completely satisfied.