Manufacturers, Suppliers, and Distributors of Cranes

Use our comprehensive list of crane manufacturers in UAE and suppliers so that you can assess and rank the best crane manufacturers. This list includes previews of advertisements as well as in-depth product descriptions. Any crane manufacturer can provide your company with crane equipment and services that fulfill the requirements that are unique to your company. In addition, a straightforward link to reach crane manufacturers is supplied via the use of our speedy request for a quotation form. It doesn't matter whether you need an electric crane, a manual crane, a gantry crane, or any other kind of crane; you may get what you need from this source.

Crane companies in the UAE

Crane companies in the UAE are among the most prominent suppliers and exporters of material handling equipment. These crane suppliers in the UAE provide various sizes of cranes, from small to large, including port cranes, stacker cranes, crawler cranes, and many more. By offering a comprehensive selection of Hoists and Cranes, they serve industries and infrastructure projects with well-engineered services and solutions. Through a network of distributors, suppliers, and/or dealers, they are effectively supplying the markets in the UAE. Some crane companies in the UAE are committed to providing comprehensive aftermarket servicing for Tower cranes, EOT cranes, hoists, and other material-handling equipment. They provide comprehensive maintenance services for Conventional power plant cranes, Industrial and workshop cranes, Gantry cranes, nuclear power plant cranes, Explosion-proof cranes, Metallurgical process cranes, Tower cranes, and several other types of cranes. They specialize in providing after-sales assistance to purchasers of overhead cranes. These services are made accessible by a team of highly competent engineers and technicians with extensive expertise. Crane companies in the UAE offer Inspections, Emergency Breakdown Repairs, Spare Parts, Formal Proactive Predictive Maintenance service, modernization & Relocation, etc. to guarantee optimal uptime of your material handling equipment. 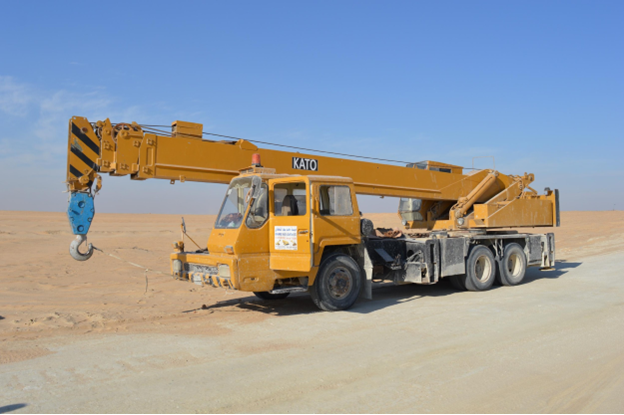 Almost every construction site will need the lifting and transporting capabilities of a crane. A crane is a machine that can hold, lift, move, and secure heavy loads on a construction site.

However, there are a few essentials to keep in mind while selecting the appropriate crane nearby for a project. You have to understand when to get a crane and when it’s not needed. Having a tower crane in UAE on the construction site of a two-story residence would be excessively expensive and unnecessary.

There are different kinds of cranes since there are diverse kinds of construction projects. A sequence of multi-story apartment complexes would be better serviced by a tower crane, but a duplex with three stories would be best handled by a mobile crane nearby. This also applies to the project's topography, the weather, the weight of the items to be carried, and the project site's dimensions. These factors will be considered while deciding the sort of crane to use. Cranes in UAE are made with the highest quality.

How does a crane function?

Cranes have been an integral aspect of the building process since their invention in Greece. Cranes in UAE are mostly used for heavy construction operations and other lifting operations.

A crane in UAE equipped with pulleys and cables and operating because of basic mechanical principles can raise and lower weights that would be impossible for a person to do.

Crane design has developed to accommodate a vast array of industrial requirements, and contemporary cranes often coordinate basic systems to do complicated lifting tasks – sometimes in locations where human workers would be at risk.

Different types of cranes in UAE are as follows. 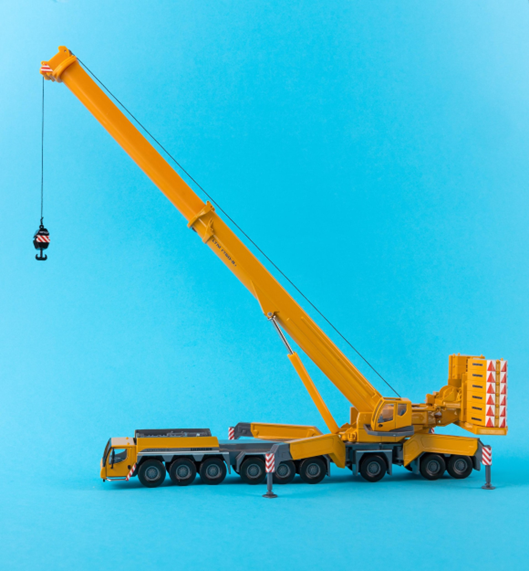 The telescopic crane comprises a huge boom inside which several tubes have been assembled.It raises its height with the assistance of tubes in the hydraulic system. They are used specifically for transporting things from one location to another.When it comes to transporting an item to a high location, telescopic cranes are preferable. Because they could adjust their heights according to the environment. They may also be used in search and rescue missions.

Most mobile cranes are mounted on trucks; however, construction cranes are designed to drive on tractors, and several cranes may be linked to barges for work on waterway bridges.Typically, the lifting arm is articulated to permit raising and lowering as necessary. Typically, this is accomplished using a system of cables or hydraulic systems, and the whole movable structure may be linked to support to increase its operational stability.

Truck-mounted cranes in UAE consist of the boom and both halves of the carrier (arm). Because of their unique structure, they are prepared to travel on the road without the need for special setups or transportation equipment.

Truck-mounted cranes are equipped with counterweights and inserting outriggers, enabling them to move slowly while carrying a substantial load. 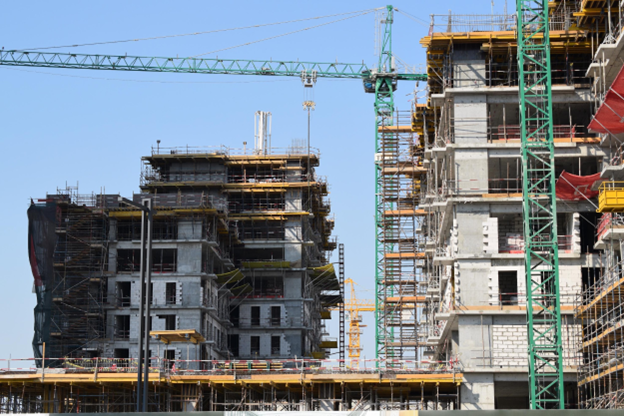 Tower cranes, which are often used in the construction of big structures, have remarkable lifting capacities. Tower cranes in UAE are fitted with an operational cab that controls the whole crane due to their size.

The jib of tower cranes extends horizontally from the mast (tower portion), which sits on a concrete foundation. A luffing jib can move up and down, while a fixed jib is equipped with a horizontally moving dolly.

On top of the mast is the engine (known as a slewing unit) that controls the rotation of the crane. Due to their scale, tower cranes are constructed together with the building; after the structure is complete, the procedure is reversed.

When constructing a large structure, tower cranes in UAE are necessary due to their height, capacity to carry big materials, and diverse characteristics.

A rough terrain crane is a crane with an undercarriage consisting of four rubber wheels, ideal for off-road use. When lifting, the outriggers extend vertically and horizontally to level and support the crane. These sorts of cranes are single-engine equipment where the same engine may be used to power both the crane and the undercarriage.

These cranes in UAE are well suited for building locations with uneven, rocky, and sandy terrain. This crane's mobility and capacity to move about the site make it an effective support crane for lesser lifts on highways, infrastructure, and building sites.

These cranes are often referred to as hanging cranes. Typically utilized in factories, some can lift very huge weights. The crane's hoist is mounted on a trolley that may travel in one or both directions along a beam.They go over the ground or raise level rails at an angle. Typically, the rails are installed along the side of an assembly area.

Bridge cranes, also known as overhead cranes, are often encountered in industrial settings. It derives its name from its resemblance to a bridge since it is supported by steel beams that span the weight and a hoist that travels along the bridge portion of the crane. There are both gantry and jib varieties of overhead cranes.

The gantry crane is a version of this overhead crane, but both phrases are occasionally used interchangeably. The most significant distinction between a bridge crane and a gantry crane is that the gantry crane is often constructed on a track and is supported by a-frame steel legs. Generally, gantry cranes are found in shipping docks and ports, where they are used to unload ships. 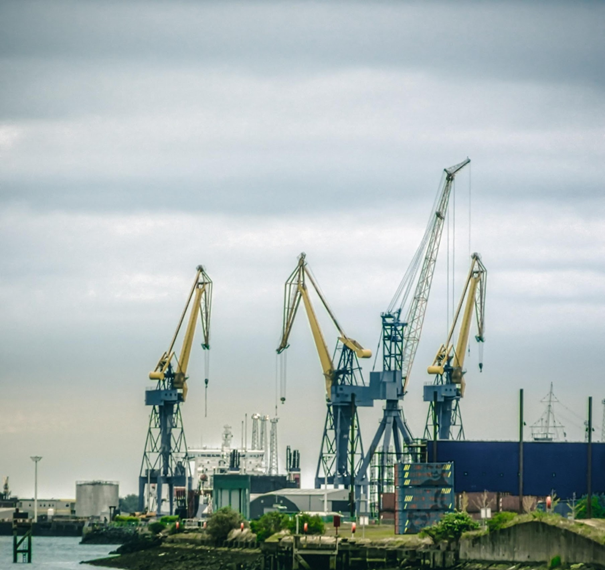 Jib cranes are only an alternative form of the bridge crane. Permanently mounted inside a workstation, these cranes are often used for repeated activities.The jib, or arm, is typically positioned on a floor- or wall-mounted pillar with a movable hoist and may have extra mobility.

The self-propelled movement of a crawler crane is facilitated by its tracks, also known as crawlers. It has several downsides and benefits depending on its use.

As a result of its crawlers, it can travel on almost any surface of the ground; it can even move on soft soils. And their primary drawback is that they are quite heavy and travel on rails. Therefore, it cannot be transported easily from one location to another and will be more expensive.However, it can be transferred simply and inexpensively using trucks.

These cranes are often referred to as Sky Cranes. They resembled helicopters and were used to transport heavy cargo.They are typically employed in locations where land access is limited. And as you are all aware, helicopters' ability to fly enables them to reach any location.Typically, they transport cargo to tall structures. They could lift boats, automobiles, and even prefabricated swimming pools. They may also be used for disaster relief.

Hydraulic cranes may have a basic design, yet they may do feats that would otherwise be impossible.In a matter of minutes, these machines can assemble road beams, move huge machinery in industries, and construct homes.

Carry deck cranes are a relatively new kind of crane that developed from the 1980s-era pick-and-carry form.They are compact, four-wheeled, capable of 360-degree rotation, and more portable than other kinds of cranes.Carry deck cranes are a staple on many construction sites because of their simple installation and compact size, which enables them to travel through both open and confined locations with ease. 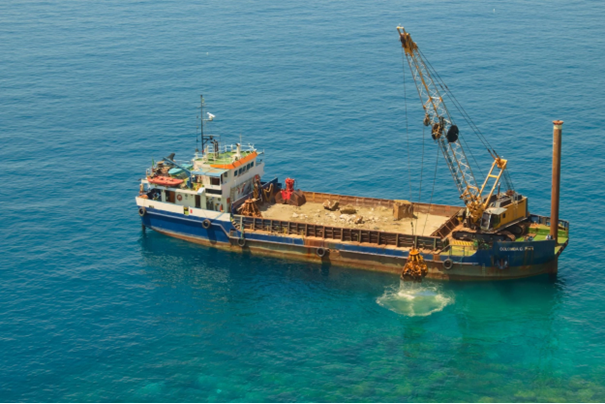 These floating cranes, also known as crane vessels or crane boats, are used for marine operations such as ports and oil rigs. These cranes in UAE have a long history; they have been employed since the middle Ages and, with the aid of constant technical developments, have aided several generations of people. There are now several types of floating cranes, including sheerleg and semi-submersible models. The sole distinction between floating cranes and other popular types is that floating cranes are utilized on the water.

Cranes designed for handling bulky items, such as coal or minerals, are used to transport huge amounts of these substances.Bulk-handling cranes feature a specialized hook with a gripping mechanism and a bucket that is used to grab, hold, and raise goods. Keeping in mind that these cranes carry bulk loads Crane companies in UAE make robust cranes

Hammerhead cranes are among the most often used on construction sites. This crane features a horizontal, pivoting lever atop a stationary tower.The trolley is supported by the front portion of the arm and may be counterbalanced by the backward-extending portion. The racking function of hammerhead cranes enables the trolley to move horizontally along the crane arm, forward and backward. These cranes are constructed on-site and may be exceedingly hefty.

Stacker cranes are automated equipment with a mechanism similar to that of a forklift and are mainly used for warehouse storage.Stacker cranes are often used in locations with specific working conditions, such as very low temperatures, making it unnecessary for human workers to tolerate such conditions.

These cranes travel on the railroad track. Railroad Cranes are used for the building, maintenance, and repair of railway lines. Due to their flanged wheels, they cannot move on roads or any other surface except railways. Crane companies in UAE manufacture the perfect railroad cranes for UAE.

The crane serves the port. So-called Harbor cranes, these cranes are used to load and unload ships. 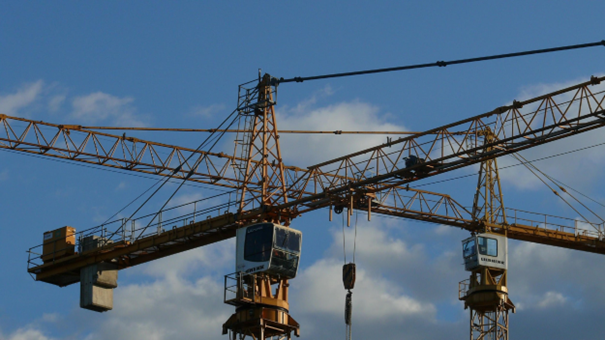 This crane is equipped with a system that keeps the crane hook at a consistent height. As a result, up and down movements of the jib arm will only cause the hook to move towards or away from the base of the crane.

This sort of motion has the advantage that the crane may be programmed to work at a constant level relative to the ground, which is advantageous when precise handling of load materials is needed, such as during shipbuilding.